In May and June fishing is relatively easy. In May the fish are hungry after a long winter, love leeches, swim in the shallows and are preparing to find beds or spawning. June is all about the spawn for Bass and Bluegills. We catch fish during pre-spawn, hammer them during the spawn and then catch tons again during post spawn phases. Soft plastics are usually the hot ticket for Bass. In July things start to change. The water temp is in the mid 70s (at least) and the fish seem to become a little bit lethargic. While the numbers of Crappie and Walleye caught are admittedly down from what we see in May and June, the bass fishing is still awesome. Particularly the top water fishing. In July we see lots of top water fisherman come through the resort. And everyone knows that September fishing is awesome. But what about August? This is a month where I hear all the time about the fishing being not so great. And yes, it isn’t like it is around Memorial Day. But it is still dang good-if you know how to fish warm water for Bass! And as a small fishing resort in northern Minnesota, we like to fish all summer, not just when the water is cold.

Yesterday I had a chance to go out fishing with Dale Luginbill. Dale is originally from the Orr area and has been wanting to move back here and start a fish guiding business. He comes up to Pelican Lake multiple times a summer either to guide or to do some serious bass fishing. We crossed paths several months ago after some text messaging last week decided to go out fishing together last night. Now I like to think of myself as an above average fisherman. Sometimes I will get in the boat with a guest and spend a couple hours hanging out fishing. Usually I hold my own for numbers and size of fish caught. Especially if we are bass fishing. That wasn’t the case with Dale. When Dale texted me last week about going fishing he asked how the fishing had been. I told him the truth. Pretty good, but definitely slower than earlier in the summer. Told him I can’t wait for September fishing. He texted back that he was going to show me a few things about summer fishing. Truth be told, I thought he was just talking a good story… I was wrong. Dale not only was way better at fishing than me, he did teach me several things!

I was pretty busy with resort jobs til about 4 pm so Dale picked me up around a quarter after 4. First we headed out to the reef outside of Island View resort. I was throwing a watermelon senko-wacky rigged- and Dale was throwing an orange crankbait (crawfish). Right away I could tell Dale knew what he was doing. He caught a smallmouth on his 4th cast, a full 5 minutes before I caught one on my senko. A couple more fish for Dale, one more for me, next thing I knew we had been there for 25 minutes.  We hadn’t caught anything larger than 14 inches so Dale suggested we run over to another rock pile just south of us. We did and on the way I tied on a new senko (pumpkin seed with black flakes). Dale caught a fish and I snagged a rock 4 times. After 10 minutes decided to go elsewhere. That was when we noticed the huge black cloud coming across the lake from the west. We had two choices, we could run back to Birch Forest Lodge in less than 5 minutes, dock the boat and take shelter, or we could get wet and keep fishing. We couldn’t see any lightening, so we decided to keep fishing. But we also decided to change spots. 5 minutes later we pulled up to an island southwest of Big Bailey Island and Dale cast his line right at a down tree. 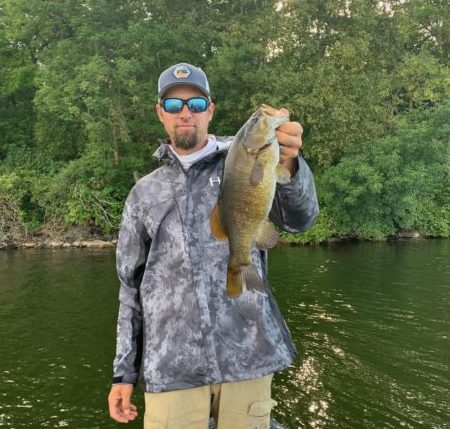 Yup, that is a smallmouth caught under a tree. Most people think only largemouth bass can be caught along down timber, but here on Pelican Lake we catch both largemouth and smallmouth bass on logs and trees. A few minutes later I hooked a nice largemouth. And so it went as we worked our way around the island. Every tree we came to we caught a fish. Many were admittedly less than 2 pounds, but we also landed several 3-4 pounders. Like this largemouth… 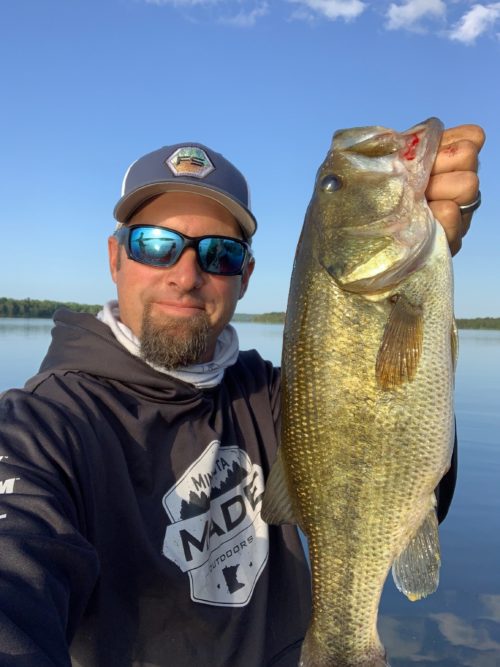 At this point Dale was out fishing me 4-5 fish for every one I was catching. I was embarrassed and a little frustrated. For a guy who owns a fishing resort I wasn’t looking like a very good fisherman. I asked Dale what I was doing wrong and he said the fish were biting really light and I was probably just not feeling them. Also, I was using a black and blue swim jig and he was using one more of a root beer color. The reason for his color choice… all the bass are feeding heavy right now on crayfish. Check out what this guy spit up while taking the hook out! 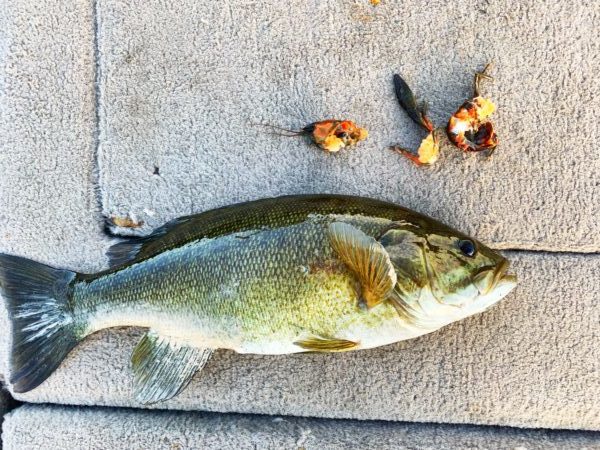 So I switched. At this point we also went to a new spot. This time we went to a rock pile with weeds around it. I was tying my swim jig on when we arrived and Dale made the first cast. A fish-another largemouth. He then cast again and another largemouth. Third cast, third fish. 3 for 3! I cast out my line and he made his 4th cast-this time nothing. 5th cast for Dale, and another fish. 15 minutes later and Dale has caught 2 more bass and I still haven’t caught a fish at this spot. I’m now somewhat embarrassed and getting frustrated. I generally consider myself a pretty good fisherman-I own a Minnesota fishing resort for a reason. But I was clearly out classed. So I asked Dale if he thought I was doing anything wrong. He made some suggestions and 5 minutes later I landed this guy. 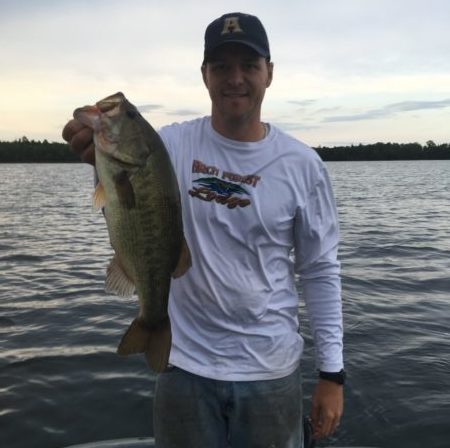 After I made some adjustments Dale continued to out fish me, but not at the 5 to 1 ratio it seemed to be early on.We went to one last spot and caught another half dozen fish, including the smallmouth below. Overall I landed 12 bass in 4 and a half hours. Not my best day on the lake, but I also lost at least that many. Dale on the other hand caught at least 40 fish in the same time frame. Long story short-the bass bite is really good if you use something that looks like a crawdad. And if you want to speed up your hiring process hire a guide-like Dale. You can check out our fishing guides we recommend here-https://birchforestlodge.com/fishing-guides/. 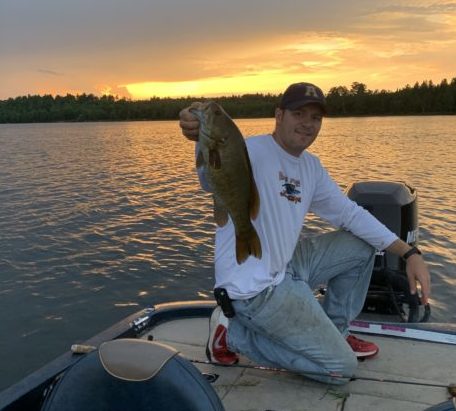