July… should be known as the month for frogging bass. So many bass caught on frog lures this month. I was out last night using a Jitterbug (3/8 oz-both leopard frog and black) and loving the explosions. Early in the month only the Moss Boss seemed to work for top water, but now we are having success with the Torpedo, any hollow frog style bait, hula poppers and of course the Jitterbug. I’ve been having success both way back in the lily pads (seriously the boat is in the pads and I’m running the lure between the pads) and along the edges of lily pads, rice/reed stalks and rocky points. The Moss Boss has been great for heavy weed conditions but the Jitterbug has done the best job of hooking the bass. Top water action has been best in the evenings, but mornings are good.

During the day time senkos and swim jigs seem to be best for the bass. Shallow running crankbaits have been okay as well. As the weeds have gotten thicker senkos are working better when Texas rigged rather than wacky rigged. The best colors have been pumpkin seed with black flakes, cinnamon with blue flakes, rootbeer, and watermelon with red and blue flakes. Spinner baits and buzzbaits have also been good for bass.

Pike have been hitting daredevils, spinner baits and buzzbaits. The best colors have been red/white and chartreuse. This pike was caught by 7 year old Drew on the dock. 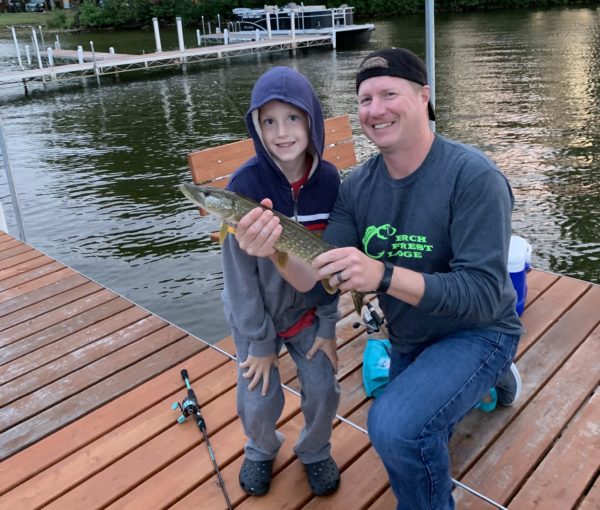 Walleye, surprisingly we are still having walleye caught. Not in the numbers we saw in May or June, but one or two a day. The walleye are still only hitting lindy rigs or crawler harness style set ups with a blade. The walleye are now in the deep water areas near Strand’s Island and between Bald Island and Cope and Peterson Island. You can find them early and late when they come out on the edges to feed. Leeches and crawlers are both working.

Crappie-not many crappie coming in right now. They seem to be suspended when found.

Bluegills. With the warm summer days we are seeing lots of Bluegill caught. For kids, the dock has been the best place to catch them. But for those who want to go out on the lake, any weed bed will work. Cut worms, small leeches and wax worms are all working well. Small jigs or bobbers and a hook will do the trick.

July has been good, lets hope August keeps it coming!