People come from all over the world to visit Birch Forest Lodge for a variety of reasons. Fishing, getting together with family and friends, visiting the bears at the Vince Shute Wildlife Sanctuary, and sitting around a campfire cooking smores and relaxing are reasons we commonly hear. When we visit with people it doesn’t matter why they come, there is one thing that everyone wishes they could see while they are vacationing here in Northern Minnesota. The Northern Lights or Aurora Borealis. Some have never seen the lights that dance in the sky. And others have seen them and never forgotten. Even though I’ve seen the Northern Lights almost 100 times, I too look to the sky each night hoping to see the fabled Aurora. Above is a picture I took of the aurora last October on our beach and below is a picture I took of the northern lights once in the boundary waters. 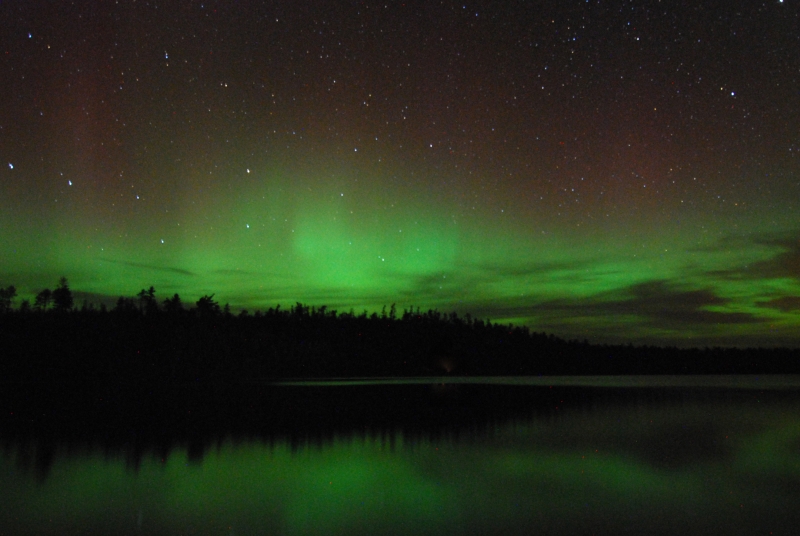 I will never forget my first time seeing the aurora light up the sky. I was 18 years old and working as a dock boy on a lake in northern Minnesota. One night we were sitting around a campfire after a long days work relaxing with cabin guests. I looked up at the sky and saw green lights dancing in the sky. I was seriously started by the sight. Then I realized that someone must have slipped something into my root beer and was likely waiting for a reaction from me. Looking around the campfire I tried to discern who might be messing with me. No one was watching me and I became more alarmed as I wondered what it all meant. Was I losing my mind? Worried I spoke up and asked if anyone else could see the green lights. Suddenly all talk died around the fire as we all gazed at the sky. None of us had seen it before and no one knew what it meant. My teenage mind raced, I was sure the world may be ending, or maybe aliens were invading our atmosphere. Alarmed I ran up to the main lodge and found one of the owners working late. Bursting thru the door in a near state of panic, I told him the sky was green. I watched as a slight grin broke on his face and he stepped outside with me. Suddenly he was laughing and asked if I had ever heard of the Aurora Borealis or the Northern Lights before. After assuring him that I really did take science classes in high school and had never heard of this phenomenon he explained what was going on. Since then I’ve had the opportunity many times to share this awesome cosmic display with many others including my wife and children. Hopefully each of you will have a chance to see the lights dance in the sky someday.

Today I would like to answer some of the more common questions we get about the Northern Lights. Such as…

Before I jump into some of this, I’d like to share this video that a friend of ours made last fall. If this doesn’t make you want to come up here and sit out all night watching for the northern lights, you need to check to see if you still have a pulse. He set up his camera on the end of the main dock and set it to continuously take a picture all night long. In the morning he spliced the still photos together and made the following video…

Let’s start with what causes this awesome phenomenon. I’ve heard some different stories over the years on what causes the sky to suddenly light up and even dance around. I’ve heard that you are seeing the reflection of the sun bouncing off the polar ice caps. I’ve been told that dust particles in the air around the North Pole are reflecting the sun. While this sounds cool, neither of these options is what causes the northern lights to appear. For those who want the full scientific explanation here is a link to a Wikipedia article-https://en.wikipedia.org/wiki/Aurora. For those of us who don’t know half the words in that explanation, here is my simplified version. Atoms above the North Pole (magnetosphere) become charged and move around. As they expand and rearrange whith other molecules they go through a process called ionization. During this process energy is released or emitted. This energy creates the light you see. While there are a few things that can cause this, the most common is the sun.

Is there any way to predict when the northern lights can be seen? Yes. Most of the time. Lets start with the basics. It has to be night time. Seriously, I get asked all the time if you can see them in daylight. I’ve seen them around dawn, in fact here is a photo of the Northern Lights playing in the sky in the predawn light. You can see the water and sky beginning to turn orange. 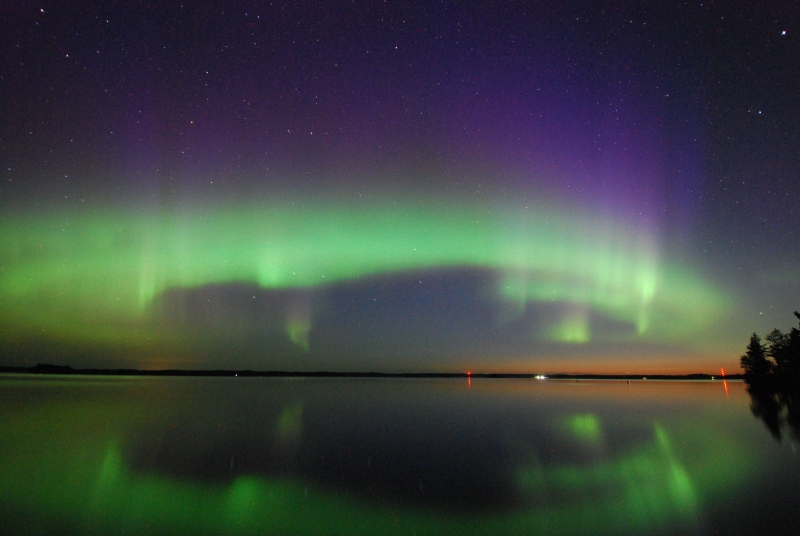 This particular picture was taken during a very strong Aurora and so even though it wasn’t completely dark we could still see the northern lights. However, it wasn’t long till we couldn’t see anything because the sun fully came up. Speaking of the sun and predicting an Aurora… The most common practice for predicting northern lights starts with the sun. The sun goes through a solar cycle, peaking every 11 years. During that time sun spots are created and many of them have a coronal mass ejection where a solar wind is released. This solar wind is full of charged particles. I follow a wesbite-spaceweather.com which keeps track of sun spots and such. Scientists are able to know when a solar wind is released. We can’t really know what speed the wind is flowing, but we can guess based on the size of the sun spot that releases the wind. Using this method we can usually predict when an Aurora will happen within 48-72 hours.

Why can’t you see Northern Lights at your house? Some of you may be able to occasionally see the sky light up. Most of you probably can’t. Why? There are two major reasons why many of you haven’t seen an Aurora in your hometown. One is most storms happen above the poles. Auroras that appear in the southern hemisphere are called Aurora Australis. Strong solar storms allow those of us in lower latitudes to see them as well occasionally. Basically, what I am trying to say is, the further south you live, the less likely you are to see the northern lights. People do see them sometimes as far south as Kansas. Whoah, you say you do live north of Kansas? Well there is a second reason you probably haven’t seen them. Light pollution. To be able to see the Aurora you need it to be really dark. Generally you can’t see the northern lights if there is a moon out. And definitely not if you have city lights. Or live any where near a city. You’d be surprised how much light a city puts off. Let me show you an example. 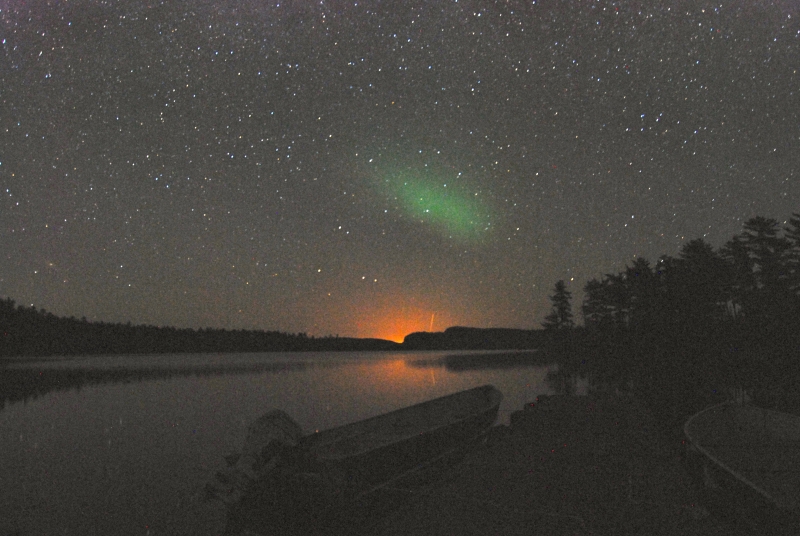 I took this photo up on the Gunflint Trail. The orange glow is the city lights of Thunder Bay-over 100 miles away! To best see something like the northern lights you need to be somewhere that gets completely dark.

When is the best time to see the Northern Lights? After dark. I’m being serious. Darkness is a major key. In June we have very long days and very little darkness. The sun sets after 10 pm, and is still relatively light until almost 11 pm and then around 4 am it begins to get light again. We have a very small window of opportunity to see the northern lights during June. In fact April, May, June and July are usually not good times to see the Aurora simply because we don’t have enough dark times. In August we usually see a couple of Auroras. And then comes fall. That is when we begin to see them with some regularity. And of course, in the winter we see them the most. However, I don’t think winter is the best time to see them. The reason I think this is I like to look at the reflection of the colors on the water. And to do that you need open water. In the winter we have snow and ice on the lakes so no reflection. My opinion is that September and October are the best months for watching for the Northern Lights. Fortunately for you, we are fully open in September and have 3 cabins open in October.

So how do you get your own photo of this cosmic display? You don’t have to be a professional photographer to get a nice photo of the northern lights. Here is what you need to have/do. You need a SLR. I use an older Nikon D60 that I bought 8 years ago. And you need a tripod. Change camera to manual focus, set your ISO to 1600 and adjust the timer on camera. I go between 15 seconds and 30 depending on darkness. If you leave the aperture open for too long you can over expose the photo, this is more likely done if there is any moon or other light. Usually I shoot my best pictures on nights without a moon and at least 90 minutes after my eyes can see the last glow of the setting sun.

So you checked out the prediction on spaceweather.com and saw that there is a solar storm headed our way. You set up your tripod, adjusted your camera and don’t see any red or green lights? You see a weird low hanging silvery cloud that is shimmering? Take a picture, see what happens. Often times your camera will show a very different image than what your naked eyes see. I’ve always thought northern lights usually appear in one of three forms. A cloud that may or may not shimmer, streaks of light moving vertically in the sky or a rippling curtain. The cloud is the most common. The color of the lights depends on several things including which gaseous molecules are reacting in the magnetosphere. Oxygen, hydrogen, neon and so forth all emit different colors. The most common color I’ve seen is a silvery white. Green and yellow are next. Red and purple are the most rare auroras. Here is an example of a strong storm that had multiple colors. 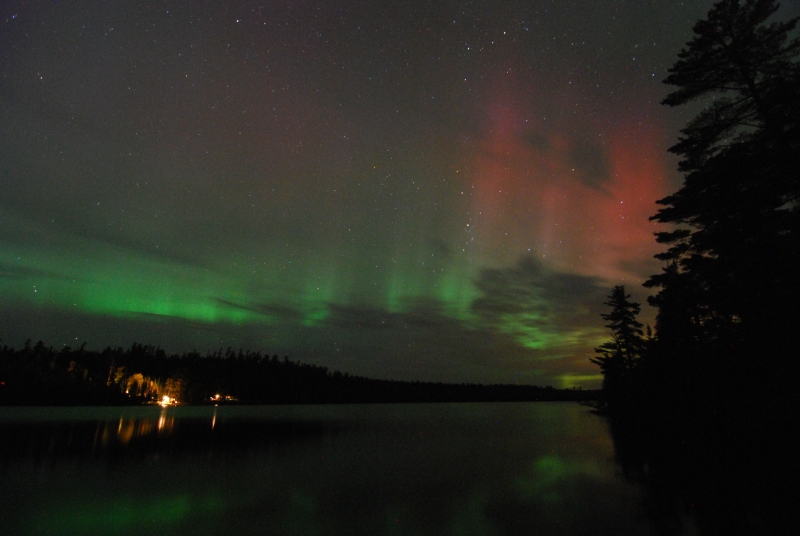 With many of the storms I’ve taken pictures of over the years, my camera almost always shows the green colors even when I only see white. I think this is because our eyes don’t always see certain types of light or levels in the color spectrum.

In a nutshell here are my tips for your best chance to view the northern lights.